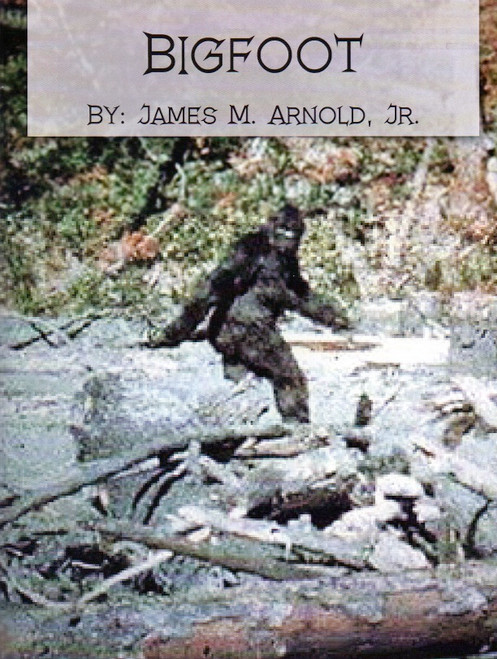 This is the book: "Bigfoot" by James M. Arnold, Jr. "Bigfoot" is about the History and search for the Bigfoot Animal and other namesakes around the world. It includes Pictures of the Animal, Castings, Various Historical Newspaper Articles as they have appeared through History Plus the Exact Coordinates of the Famous Bluff Creek Location so you can it check out for yourself. The Book is 40 pages, measures 8.5 inches x 11 and is full color. Each "Bigfoot" Book comes signed by the author.

Bigfoot, also commonly referred to as Sasquatch is an ape-like creature that is purported to inhabit the forests of North America. Supposed evidence of the existence of Bigfoot is based on a number of anecdotal visual sightings, disputed video and audio recordings, photographs, casts of large footprints, etc. Bigfoot has become an icon within the fringe subculture of cryptozoology and an enduring element of popular culture. Other creatures of relatively similar descriptions are alleged to inhabit various regions of North America and throughout the world, such as the Skunk Ape, the Almas, Yeti, Abominable Snowman, Yeren, Australian Yowie.  All of which, like Bigfoot, are engrained in the cultures of their regions.

Thousands of people have claimed to have seen a Bigfoot which is often described as a large, muscular, bipedal ape-like creature, roughly 6–9 ft, covered in hair described as black, dark brown, or dark reddish. Some descriptions have the creatures standing as tall as 10–15 ft. A pungent, foul smelling odor is sometimes associated with reports of the creatures, commonly described as similar to rotten eggs or skunk. The face of a Bigfoot is often described as human-like, with a flat nose and visible lips. Common descriptions also include broad shoulders, no visible neck, and long arms. The enormous footprints for which the creature is named are claimed to be as large as 24 in long and 8 in wide. Some footprint casts have also contained claw marks, making it likely that they came from known animals such as bears, which have five toes and claws.

On October 20th, 1967 Roger Patterson and Bob Gimlin spotted and filmed Bigfoot at Bluff Creek California. They shot 24 feet of film, 952 frames to be exact. This historical film has never been discredited by professionals or scientists. Both men still, Roger till his death, stand by its authenticity.

Note that you will receive a Free PDF Copy of this book with each purchase of the Bigfoot Casting, Bigfoot Pendant and Yeti Hair Relic.