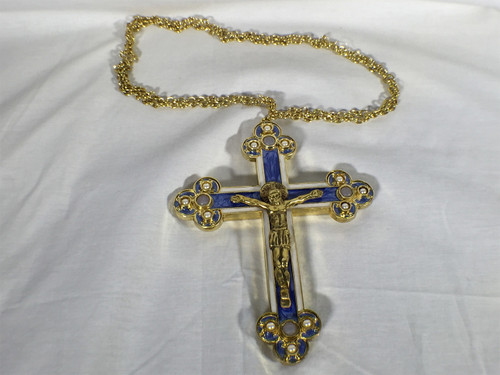 This Should be in a Museum!

Panama Hat hired a gang of men led by Fedora to dig in the caves. In 1912, two Scouts, a Young Indiana Jones and his friend Herman, stumbled upon the gang's looting and observed their discovery of the Cross in the Caves. Recognizing the Artifact, and holding a firm belief that it belonged in a Museum, Jones sent Herman to get help while he attempted to seize the Cross out from under Fedora's men. However, Jones was caught in the act and chased back to his home. Although Herman brought the Sheriff, the lawman saw to it that the Cross was returned to Panama Hat.

The Cross Of Coronado was a Jewel-Encrusted Golden Crucifix with a Chain; named for Spanish explorer Francisco Vásquez de Coronado. It was originally commissioned by Emperor Justinian II and was believed to contain a Piece of the Cross upon which Jesus Christ was Crucified. The Inscription on the back was also nearly identical to that of the Crux Vaticana which predates it. In 1520, the Spanish conquistador, Hernando Cortés gave the Cross to Francisco Vásquez de Coronado and sent him in search of the Seven Cities of Gold but Coronado lost it during his ultimately futile quest for treasure.

This Collectable is part of our Special "Indiana Jones Collection." This is an Exclusive: Signed, Numbered, Limited Edition of Real Prop Replicas. This item is a Very Detailed Prop Replica of the Famous Cross of Coronado as it was seen in the hit film:  "Indiana Jones and the Last Crusade (1989)" Starring: Harrison Ford and Sean Connery. This Cross is an Artists Rendering made Directly from various Drawings, Pictures and Specifications of the Real Prop Cross. Each item comes complete with a 4 x 6 Card that has Poster Art from film and also explains the Cross Of Coronado's part in the film. Cross comes in a Burlap Bag ready for your next Adventure!

Our Cross Of Coronado is made out of Solid Gold Plated Metal and weighs 3' pounds and comes complete with a 28 Inch Gold Metal Chain. The Cross Of Coronado measures, in inches; 9 long by 7 wide by 1 Thick. It is decorated with 12 artificial Pearls and 4 Genuine Custom Cut Blue Lace Agata Cabochons (light blue gem). The Cabochon has a lower profile than the spherical Pearls, just like as seen on the Original Prop. Around each Pearl is a decorative recess, hand-painted with Dark Blue enamel. The centre inlay is Dark Blue laminate set in deep grooves & the thin strip is filled with a shiny Pearl surface. Featured on the back of the Cross is Lettering based on the Historic Cross of Justinian II. The engraving, in Ancient Greek, mentions that the Artifact Contains a Relic of the True Cross. This Inscription was carefully copied from Documentation off the Original Prop.
×