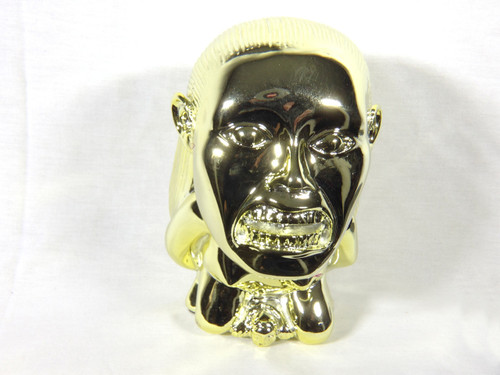 Please note and read this first.

This Idol is a Second item.

What does this mean? It means that the Idol you are purchasing here, while being brand new in box, had some flaws with it and we cannot sell as one of our standard Plated Shiny Idols at $149.99. What does flaws mean? While inspecting these Idols upon check in we found several that had defects in manufacturing. However slight these were we could not sell as the standard product. There were various types of flaws across the whole number of these Idols. These Flaws are very slight on some and on other very noticible. Some only have one type of Defect and others have more. They range from a slight dimple here and there, some slight pitting on the plating. We are offering these to you at below cost in order to give you chance to get a $149.99 version with defects at a much discounted price even less than the Classic Idol version. Once received you can determine yourself if the defects really do not bother you, Refinish and repaint Gold to be like a regular Idol or try to repair defects. For obvious reasons, once bought there is no returns on these specific items. We will allow upgrades and trade ups if you wish.

This is one of the Most Recognizable Collectable Pieces in the World and is a Must for any Serious Indiana Jones Collector!!

In 1936, American Archaeologist Indiana Jones Braves an Ancient Booby-Trapped Temple in Peru to retrieve The Golden Idol of Fertility. He is confronted by rival Archaeologist René Belloq and the Indigenous Hovito people. Surrounded and Outnumbered, Jones is forced to surrender the Famous Idol to Belloq and escapes aboard a waiting Water Plane.

Raiders of the Lost Ark is an Epic tale in which an Intrepid Archaeologist tries to beat a band of Nazis to a Unique Religious Relic which is central to their plans for World Domination. Battling against a Snake Phobia and a Vengeful ex-girlfriend, Indiana Jones is in Constant Peril, making Hair Breadth Escapes at every turn in this Celebration of the Innocent Adventure Movies of an Earlier Era.

This is a Very Special Limited Edition Golden Idol of Fertility Idol as seen in the Famous Film Raiders of the Lost Ark (1981) Starring: Harrison Ford, Screenplay by: George Lucas and Directed by: Steven Spielberg. This Movie Replica Is Cast from a Mold that was made Directly from a Real Prop that was used in the Film. This Original Prop used in the Molding process was Obtained Directly from Elstree Studios. They made all of the Props that were seen in the Film. The Original Props, there were 14 as mentioned in various books, were Originally Inspired by Inca and Pre-Columbian Art. The Female Figure was Designed with a Horrific Countenance to Heighten the Suspense as Indiana Jones Approaches the Golden Relic. When Spielberg first Sketched an Image of the Idol he Scribbled the note: Statue seems to be Watching, Cursing his every Step.

This is the Shiny Gold Plated Version of the Famous Idol of Fertility that was Seen in the Opening Sequence of the Film. This High Quality Film Replica Casting is Gold, Shiny and Electroplated with 24kt Gold Finish, that is Sure to Please. It is Made out of a Very Durable Resin Material and Weighs 7 Pounds and measures 8 inches tall x 5 inches wide x 6 inches deep.

The Circular Jungle Idol Stand is available as an Option. It was designed with Inca, Aztec, Mayan, Pre-Columbian type Artwork applied. It also looks very similar to the original stand that the Famous Idol was sitting on when Indy switched with his bag of Sand.